Local government officials are frequently contacted by concerned residents who spot coyotes in developed areas. Coyotes are common throughout Ohio’s 88 counties and are regularly seen within city limits. Coyotes are helpful to keep rodent populations in check and have an indirect role in helping to keep native bird populations flourishing. Generally, coyotes are reclusive animals who avoid human contact. Sometimes they become bolder as they get more comfortable and lose their natural fear of people.

Parks and golf courses provide a natural habitat and food source inside rural neighborhoods for coyotes to locate. A resident with homes next to a city park or golf course should be extra mindful of coyotes. In some cases, the underbrush on City property next to a residential home may be removed to deter continued coyote issues. Most often a coyote sighting is no cause for alarm. However, residents should call the Police Department if they notice a coyote or any animal that appears hurt, sick, or habituated.

Coyotes may become habituated (lost their fear of humans), probably owing to the bounty of food that they have become accustomed to feeding upon in your neighborhood. These bold coyotes should not be tolerated or enticed but instead given the clear message that they should not be so brazen. Hazing is a method that makes use of deterrents to move an animal out of an area or discourage an undesirable behavior or activity. Hazing can help maintain a coyote’s fear of humans and deter them from backyards and play spaces.

Hazing is important to deterring coyotes from your neighborhood. However, remember that if the coyote “holds its ground”, acts aggressive, and/or displays odd behavior do not approach the animal and call the Police Department for assistance.

Using a variety of different hazing tools is critical so that coyotes don’t get used to redundant or single stimulus devices, sounds, and actions.

The simplest method of hazing a coyote involves being loud and large. Stand tall, wave your arms, and yell at the coyote, approaching them if necessary, until they run away.

If a coyote has not been hazed before, they may not immediately run away when you yell at them. If this happens, you may need to walk towards the coyote and increase the intensity of your hazing. The coyote may run away, but then stop after a distance and look at you. It is important to continue to go after the coyote until they completely leave the area. Remember that if the coyote “holds its ground”, acts aggressive, and/or displays odd behavior do not approach the animal and call the Police Department for assistance.

Check out this video for more information on the coyotes

Neighborhood Collaboration for Keeping Coyotes Out 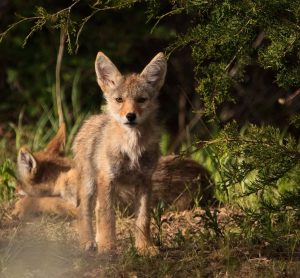