All the wastewater that enters the new Water Reclamation Facility is first pumped from the Influent Pump Station to the Screening and Grit Building. 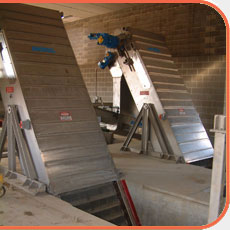 A pair of screens removes sticks and other large objects

In the Screening and Grit building, a 40′ x 72′ single-story structure with a basement located at the opposite end of the plant, preliminary treatment occurs by removing extraneous material in the wastewater such as sticks, cardboard, paper towels, and non-biodegradable (inorganic) waste. These items get into the system because they were accidentally or improperly flushed down the drain, or they were dropped or washed into a broken or uncovered pipe somewhere in the collection system.

Wastewater entering the building first passes through one of two 5-foot wide rectangular concrete channels. Each channel contains a mechanical screen set at a slope of 60 degrees from horizontal. The water in the channel flows through a screen that has rows of ¼-inch wide round openings. Any material in the wastewater that cannot pass through these openings accumulates on the screen and is automatically removed by a mechanical brush and a continuous flow of water. The material removed from the screens is compacted to squeeze out the water, deposited in a bagging system, and dumped into a dumpster for separate disposal at the Rumpke landfill.

Having two mechanically cleaned screens insures that at least one screen is available, even if the other is out of commission or being repaired. As further backup, the wastewater entering the Screening and Grit Building can also be directed to a manually cleaned bar screen that has ¾-inch openings.

After flowing through the screens, the wastewater flows into two 14-foot diameter circular tanks called grit collectors. Here, the velocity of the water is slowed to the point where the heavier inorganic grit particles contained in the wastewater settle out. It is important to remove these grit particles in order to protect downstream equipment from undue abrasive wear. Grit that accumulates in the grit collectors is pumped to two devices known as grit classifiers. These classifiers return any remaining organic particles back into the plant flow for processing. They also dewater the grit prior to dropping it into dumpsters for disposal.

Effluent flow from the grit collectors drops into a 48″ gravity pipe to the next step in the treatment process, the Oxidation Ditches.