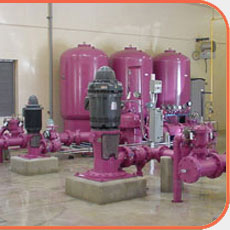 Nearly all of the water that is reclaimed at the city’s Water Reclamation Plant is returned to the environment. A relatively small portion is pumped to one of three different areas for reuse. The pumps that take care of this are housed in the disinfection building.

There are three separate pumping systems in this building. All of them draw their water from treated plant effluent. (Effluent is the water flowing out of the plant and is the opposite of the raw sewage influent.)

The non-potable water (NPW) system provides water for a number of uses throughout the plant that do not require potable (drinkable) water. These uses include water to clean the grit screens, dryer cooling water, and water used to wash down equipment in buildings and the plant yard.

The NPW pumping system consists of four vertical turbine pumps, three hydropneumatic tanks to maintain steady pressure over a wide range of flows, a strainer to eliminate extraneous material in the water, and surge relief/pressure relief valves. The NPW system runs at a pressure of around 75 psi and can deliver flows from 0 to 300 gallons per minute. The total in-plant NPW usage averages about 3.5 million gallons per month. This represents an estimated annual savings of more than $50,000 since processed water does not have to be purchased for these uses.

This system consists of two vertical turbine pumps and a surge relief valve. There is room to install two additional pumps if there are additional customers needing large amounts of irrigation water.

Due to the elevation of the golf course and the length of the force main to it (about three miles), the reclaimed water system operates at a very high pressure of around 180 psi. The normal flow when the system is in operation is about 500,000 gallons per day.

Use of the reclaimed water allows the golf course to avoid purchasing higher-cost drinking water for irrigation.

Due to public health concerns, systems that provide treated effluent for irrigation are subject to close scrutiny by Ohio EPA. The city must at all times maintain a positive chlorine residual at the point of discharge to the golf course’s holding pond. The city is also required to do bacteriological sampling. Mason has been selling water to Heritage Club since 1995 and has as very successful track record. About $12,000 is recovered each year through this use of reclaimed water.

Similar to the golf course system, a dedicated system pumps reclaimed water to the nearby Mason Sports Park to irrigate the ball fields. The water used is considered “Class A Effluent” because it incorporates additional treatment to make it suitable for irrigation. During dry periods, it is estimated that the city will save between $20,000 to $25,000 per year by not having to purchase treated drinking water for irrigation.

savings for the city

Compared to the 8.67 million gallons per day that the plant can process currently, these above uses of reclaimed water are small. But when the savings incurred by reusing this treated wastewater are added up, they produce a significant reduction in expenses for the city.