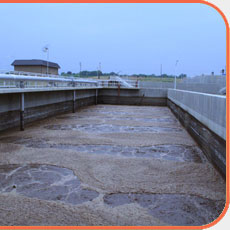 the biology of the treatment process

Wastewater is processed by bacteria that feed on the biological compounds found in the wastewater (sewer water). The bacteria need air (oxygen), food (the organic waste in the water), and water (where they live) to survive and reproduce.

As you drive by or enter the city’s Water Reclamation Plant (WRP), you can’t help but notice the super-sized oxidation ditches in the middle of the plant. These huge 458- by 108-foot oval concrete structures are where the bacteria do most of their work. Each oxidation ditch holds 5.6 million gallons of water. Depending on the volume of wastewater coming into the plant, it takes 16 to 27 hours for wastewater to be processed through these “ditches.”

The anaerobic zone is the outermost rectangular tank attached to the far east end of the oxidation ditches. There is virtually no free oxygen in the water here. It is where wastewater loaded with the nitrogen compounds and oxygen-phosphorous compounds mentioned above enters the oxidation ditches. It is also where some of the sludge from the end of the oxidation cycle is returned. By the time this Returned Activated Sludge (RAS) is pumped back to this zone, it is loaded with oxygen-starved bacteria that are hungry for food.

Underwater mixers are used to promote contact between the influent sewage and the Returned Activated Sludge, creating what is known as “mixed liquor.” The bacteria reproduce at a massive rate because of the abundance of the oxygen-phosphorous compounds (their food.) But in order to survive, the bacteria also need oxygen. Since there is no oxygen in the water, the bacteria release the phosphorous stored in their cells and retain the oxygen. This decomposition of the oxygen-phosphorous compounds results in an increase of soluble phosphorous in the liquor.

The anoxic zone is physically located between the anaerobic tank and the oxidation ditches. It has very little free oxygen in it, as low as one half milligram per liter or less. Because there still isn’t enough oxygen, the bacteria also take oxygen from the nitrogen-oxygen compounds that are also in the water. As this occurs, in a process called denitrification, what’s left of the nitrogen-oxygen compounds is nitrogen gas, which is simply released to the atmosphere where it also occurs naturally.

the high-oxygen (oxic, or aerobic) zone

In the oxic (aerobic) zone, the abundant oxygen supply contributes to the breakdown of the major contributor of nitrogen in the waste stream,the ammonia nitrogen (NH3). In a process called nitrification, the bacteria separate the hydrogen (H) from the nitrogen, releasing it to the air, and replace it with oxygen to create nitrate (NO3).

The oxic zone must be maintained for a sufficient period of time to promote the nitrification process. It takes place in the oxidation ditches. Underwater pumps and mixers incorporate air into the water to maintain sufficient levels of oxygen during this stage.

The bacteria in the oxic zone continue to reproduce. In the abundance of oxygen here, the new cells, along with the old ones, replenish the oxygen-phosphorous compounds in their cells.

Phosphorus removal from the wastewater is ultimately achieved by removing from the system the phosphorous-enriched sludge created in this zone. Some of it is returned to the anaerobic zone as Returned Activated Sludge (RAS).

A portion of the mixed liquor in the oxidation ditches is continually being removed. It is returned back to the anaerobic zone as Returned Activated Sludge or sent off as wasted sludge to the clarifiers.

The three-stage activated sludge process described here is the major component in allowing the city to meet all of the new, more stringent limits set by the Ohio EPA for wastewater.