After the oxidation ditches, clarifiers are one of the most important parts of the biological treatment process of wastewater. 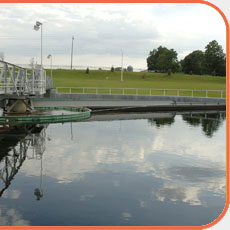 The three large round basins that can be seen at the new treatment plant are secondary clarifiers, sometimes referred to as final settling tanks.

The function of the final settling tank is to let the activated sludge solids (the waste) in the wastewater fall to the bottom of the tank, leaving a clarified effluent that can be returned to the environment. This is accomplished by providing a still water tank with the greatest detention time practical. The process is similar to what happens when you add chocolate powder to a glass of milk. If you stir it, the powder stays suspended. If you let it sit undisturbed, the chocolate falls to the bottom. The longer it sits, the more particles that settle out.

Each of the three final settling tanks is 105 feet in diameter by 15 feet deep, and each holds approximately one million gallons. The influent is pumped from under the tank up through a center influent feedwell. It is discharged through large holes on the sides of a central cylinder, sending it out horizontally. A large barrier around the central unit interrupts the flow of the wastewater, reducing the current. Only a low velocity flow enters the tank, assuring maintenance of quiescent conditions for the most efficient removal of solids. The feedwell is equipped with baffled scum ports that permit floating material to escape from the top of the feedwell to where it will be picked up by the scum rakes.

The scum rakes are rubber squeegees that are dragged across the surface of the clarifier. As the rakes travel across a fixed scum trough, any material picked up is dropped into the trough. Water is then used to carry it back to the head of the plant for additional treatment.

The scrapers on the floor of the tank convey the sludge that settles on the bottom to the sludge sump located in the center of the clarifier. It then flows by gravity into a tank, from which it is moved to various destinations by pumping. Some of the solids are returned to the head of the plant as returned activated sludge (RAS) and a portion is sent to a gravity thickener as waste activated sludge (WAS). By removing the settled solids from the bottom of the clarifier tank as quickly as possible, the efficiency of other treatment processes is greatly improved.

The scum baffle is located close to the weir near the outer wall of the clarifier. It retains scum in an area where the scum rakes can remove it. Clear effluent passes under the scum baffle, which is only about a foot high. It then goes over the weir to the launder, a trough that collects the effluent and sends it to be disinfected.

The effluent is sent to different areas for final distribution. The majority of it goes to the stream via the disinfection building. A portion during the summer months is sold to a local golf course for irrigation, a portion is used to irrigate the fields at Mason Sports Park, and another portion is used inside the plant for cleaning and various treatment processes. By reusing treated water in the plant and at the park, the city will save thousands of dollars a year by not having to purchase treated drinking water for these purposes.

The next stop after the clarifiers is the disinfection building.