Climb up in the cab with us and see what it’s like to drive a snowplow!

An interview with two City of Mason snowplow drivers who worked a huge snowstorm in 2004. Early on a Wednesday, the snow began. By Thursday morning rush hour, about 14 inches of snow were on the ground. On Thursday, many businesses were closed throughout the region or opened late as a result of the storm.

Interviewer: How did you prepare for the big snowstorm? 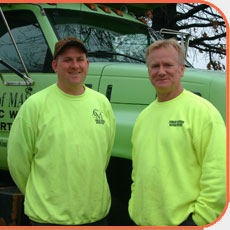 Mike: Last November, we started getting ready, doing general maintenance on the trucks, checking the plows, planning plow routes, learning which of the new streets were added to the plow list, driving the streets to look for things that might catch the plows, things like manhole covers and curbs.

Eric: Beginning Monday morning before the snow hit, we began taking the leaf boxes off the trucks, putting plows and salt spreaders on, checking fluids and fuels, switching out worn plow blades, adjusting the blade shoes. By Tuesday at 3:00 in the afternoon, we were ready.

Mike: Before we went home on Tuesday, we loaded three trucks with salt and put them in the garage, so they’d be ready to go first thing. We all took a pager home with us. It went off at 4:00 a.m. and we were all in by 5:00 on Wednesday morning.

Interviewer: Did you know exactly what to expect for the coming hours?

Eric: Different stations were giving different predictions for the amount of snow to expect. Initially, all of us went out to check our routes and salted where it was needed. Sometimes you can be here at the garage and there’s no snow, but in another part of the city it’s already accumulating. This storm started out light–by 7:00 a.m. we were all back at the garage.

Mike: We headed back out at 9:00 a.m. when it started coming down harder. Initially, we salted conservatively, intersections and bridges, mainly because we didn’t know how much salt we’d need and didn’t want to run out.

Eric: By 11:30 a.m., it was really coming down. We quit salting–it would have just been plowed off anyway. Plus, it was getting cold enough that it wouldn’t be effective. By then, it was an effort just to keep the main roads plowed.

Mike: We concentrate on the main roads and main streets through subdivisions first. Each truck does a specific area of the city. Sometimes on wider roads like Tylersville, we get two or three trucks from the areas bordering it and run them down the lanes on one side of the street at the same time, in tandem. That way, we can clear the whole side of the street at once. If you have only one truck, by the time you come back to do a second lane, moving cars have already pushed snow back into the lane you just cleared.

Eric: Wednesday night, we were still working on the main routes. By about 2:00 a.m., most drivers were exhausted–they’d been out for 21 hours. Some caught a few hours sleep at the garage office; others who live relatively nearby went home for some sleep. Employees from other city departments who have commercial driver’s licenses were called in to relieve us.

Interviewer: Do you get any breaks during those 21 hours?

Mike: When it’s coming down that fast, you really want to keep going. Some of us bring sandwiches, snacks, and water; others pick up a hamburger or cup of coffee. You can’t eat while you drive because you need both hands for steering and controlling the plow. So you eat quickly, then get back in the truck.

Eric: Sometimes you get a short break out of the truck if you have to bring it in for repairs. Unless there’s another truck without a driver–then you take that one out.

Mike: Seems like the mechanics don’t get a break, though. If they’re not fixing a truck, they’re driving one.

Interviewer: Thursday morning, it stopped snowing after about 14″ of snow and freezing rain. Did you get a rest then?

Eric: Thursday morning, we were coming back to relieve the drivers who relieved us. The ice in the snow really made it difficult to clean up. Thursday morning we were still clearing the main roads and through streets.

Mike: After doing those, we got into the secondary streets. Cul-de-sacs are last. We didn’t get into the subdivisions until early Thursday afternoon.

Eric: Cul-de-sacs are always a challenge. Especially when cars are parked on the street. They’re usually parked in places that are not by a drive, hydrant, or mailbox. Those are the same places we would normally push the snow. Sometimes, we’re left with no choice but to pile it where people don’t want it.

Mike: The natural action of the plow pushes snow into the ends of driveways. One way to minimize this is to pile the snow on the right side of the drive as you face the street. If you put it on the other side, the plowed snow has nowhere to go but beyond the pile–into your driveway. Unfortunately, there’s no way to eliminate the problem entirely.

Eric: I’ve also seen people shovel or use a snow blower to put the snow right back into the street. It would be better to put it on top of the lawn somewhere.

Mike: We had everything pretty much cleared up by late Friday. A few drivers came in the next day for some cleanup, and a few came in the day after to tackle a few areas.

Interviewer: Does driving the plow for nearly two days straight require a lot of physical stamina?

Eric: By the end of a 21-hour shift, your neck and back are sore, you have a tension headache, your eyes ache from trying to see through the falling snow and trying to see where the edge of the road is.

Mike: After you’ve been driving through falling snow for hours, watching those flakes coming at you, and you stop, the movement of the still-falling snow makes it feel like you’re still moving. After a particularly long shift, you can find yourself pushing on the brake to stop the truck, even when it’s in park.

Eric: After being in the truck for hours on end, you get “sea legs.” I guess maybe they should be called “snow legs,” but it’s the same kind of feeling. You feel like you’re still moving even when you’re standing on solid ground.

Mike: And if you forgot to take your wallet out of your pocket, it takes about 20 minutes for the feeling to return to your hip!

Eric: After this last storm, it took me a couple of minutes before I could even stand up straight after sitting so long. My knuckles and even my palms were sore from gripping the wheel and working the plow controls.

Mike: Even if you aren’t sleepy, you’re physically exhausted.

Interviewer: Are most people pretty understanding about having to wait for their street to be done?

Mike: You get some who complain. One man jumped on my running board and began pounding on my window. I stopped and rolled down the window. He started chewing me out because a plow hadn’t been down his street yet. Some call the city and complain. But there are a lot more, by far, who are understanding and appreciative.

Eric: This last storm, the snow was so heavy that some of the trucks got stuck in the subdivisions. Residents came out with shovels to help dig out. Some brought out cookies and hot chocolate or sodas. Sometimes they call in to say thanks, or give us a wave of thanks as we go by. It’s nice to remember those in the middle of a long night in the cab.