The City issues primarily tax-exempt municipal bonds/notes which are governed by the Internal Revenue Code and have specific compliance requirements enforced by the IRS.  As a political subdivision of Ohio, the City’s debt is also governed by the State Constitution and laws.  Issuing debt is a coordinated effort between bond counsel, Law Director, a municipal advisor, bond underwriter and Finance Director Joe Reigelsperger. City Council has final authority over the issuance of debt.

Issuing debt can be prudent when it is used to finance capital expenditures that provide a benefit to the community for many years.  The burden for the cost of capital improvements such as roads, sewer lines, the Water Reclamation Plant and other municipal facilities is not placed upon those living in the community at that time but by future residents who will benefit from the improvement.  When debt is issued in conjunction with sewer related projects, a utility rate analysis is often conducted to ensure revenues received from user fees are adequate enough to support the repayment of the debt used to finance construction costs and operational expenses during the term of the debt – often 20 to 25 years.

Many factors are considered before the City makes the decision to issue debt including:  Council’s priorities and objectives, market environment, fund balances, reserve amounts, current and future commitments, return on investments and legal constraints.  The primary consideration is the current and future capital improvements needed in the City.  During the budget process, the Finance Committee evaluates long-term capital needs of the City along with sources of funding for these capital improvements.  Many projects are funded using grants and existing fund balances.  Other projects may require debt financing.  In 2013, the City financed the Service Center facility acquisition and initial improvements through the issuance of $5 million of debt which increased to $6 million in 2014 for remaining improvements.  In 2015, $3 million was issued for the local share of the Western Row Rd/I-71 interchange.  The City’s 5-year capital improvement program includes projects such as Park/Recreation facilities, Golf Center, Lou Eves Municipal Pool, and Sundin Fields at Heritage Oak Park improvements that all may need financing.  Most street improvements projected for the next five years are anticipated to be financed by grants and City fund balances.  Establishing City capital priorities and financing these priorities is an ongoing discussion by City Council.

Another factor in issuing debt is to leverage opportunities that provide economic development or other financial benefits for the City.  For example, bonds may be issued to complete public infrastructure on a development that attracts businesses to the community.  These bonds are paid using the increased revenue generated by the increases in property tax value by businesses using Tax Increment Financing (TIF).  Special assessment bonds were issued in 2018 that facilitated utility infrastructure for Ambleside Meadows and future development along US 42.  Future development in the Oak Park area near the I-71/Western Row Rd interchange will require significant infrastructure improvements financed through TIF bonds.

The following table illustrates outstanding debt of the City since 2008: 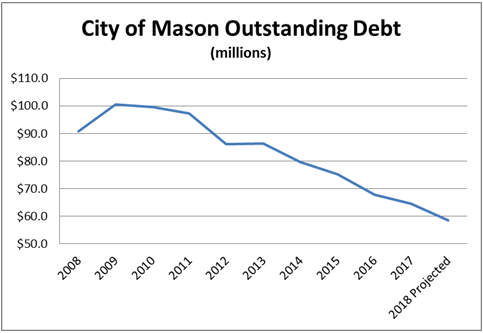 Debt is financed using a variety of commitments and obligations for repaying the debt.  General Obligation debt is issued upon the City’s full faith and credit.  In short, the City commits to repayment of this debt using all resources available to the City.  Revenue bonds commit a specific revenue source towards the repayment of the debt.  Certificates of Participation function similar to a lease allowing the City to make payments to a leaseholder.  The lease payment is only secured by the annual appropriation of the lease payment and the collateral (i.e. the facility).  The Municipal Center and Community Center Expansion is financed through a lease.  The lease payment from TriHealth is used towards the repayment of the lease for the Community Center expansion.  The following graph illustrates the outstanding debt by issuance type: 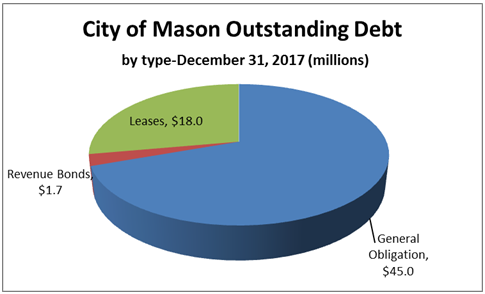 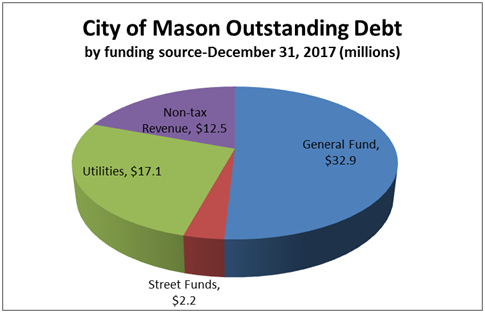 Debt is also a function of a City’s growth curve.  During rapid growth, long-term investments keep growth balanced and economically viable.  It is appropriate to issue debt for such projects so that current and future users of that infrastructure pay for the improvement.  The improvements also ensure the business-friendly environment necessary to financially sustain the community.  This is in contrast with relying on debt to sustain the operating expenses of the City – sometimes called deficit spending.  Mason does not use debt to cover operating expenses.  Historically, the City has used sound fiscal and management practices when issuing and managing debt.  This is perhaps most evidently demonstrated through the City’s Aaa Moody’s bond rating.

While there may be differing opinions on the merits, value or timing of specific capital projects that Council has authorized over the years, I am confident that the City has effectively utilized debt to finance these projects at minimum expense to present and future taxpayers.

Below is a table that breaks down the City of Mason outstanding debt projected for 2018.